If I were my own best friend I would tell myself to learn another language. 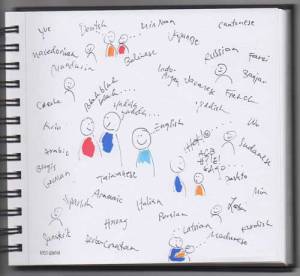 ***I love foreign languages. I love listening to other people speak them. I love reading them. I love that there are so many different languages in this world and they all result in communication between people. I love watching foreign films and do not even care if there are subtitles.

I, however, do not seem to have the gift of learning other languages easily. I worked through 8 years of French in high school and college (please emphasize the word “work”). I have tried to learn Spanish four times now with very little success. I have read the studies on the importance of learning multiple languages and the cognitive changes that are seen in people who do know multiple languages. It’s a powerful thing!

Last week someone wrote me in Latin and I was inspired! It was actually a text in Latin and I thought that was amusing because in my mind Latin is a very old language and texting is a very new thing and the combination of the two just made me smile.

So in honor of learning new languages and expanding horizons I will complete this post in the only other language I have ever been able to master: pig Latin!

This entry was posted in Advice. Bookmark the permalink.